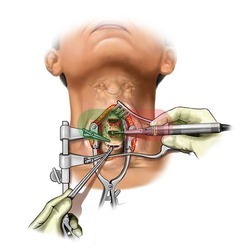 Cervical discs are the cushions that exist between the bones (vertebrae) of the cervical spine. Discs that are damaged by injury or degeneration, such as herniated discs, can cause pain, numbness, and weakness. When a disc moves out of its normal location or is compressed, frays and/or herniates in the adjacent spinal canal, it may exert pressure on the individual nerve roots leaving the spinal canal at each vertebral level or in the spinal cord. The non-physiological movement produced by disc degeneration can cause the body to produce so-called osteophytes, which form over a period of time and can also cause pressure on the spinal cord or nerve roots, resulting in pain.

The disc prosthesis is usually composed of two metal implants, although some devices use other materials (PEEK or plastic). In order to get stability and secure the disk in its right place, almost all the models have teeth-like structures (called spikes or fins) on the upper and lower surfaces of the endplates which are driven into the vertebral bone.

The structure of the artificial disk offers a reversible and viable alternative to fusion; which possibly avoids the disadvantages of the fusion. By inserting an artificial disc instead of fusing the spine, there is the possibility of reducing damage to nearby discs and joints. This is due to the artificial disk spikes allowing the preservation of movement, the normal distribution of stress along the spine and the pre-degenerative restoration of disc height.

Surgery is carried out with the patient under general anesthesia and positioned face up. A horizontal incision of about 3-5 centimeters is made on one side of the patient's neck (usually the right side). Then we proceed to remove the affected disc located between two vertebrae and this space is filled with extreme caution with the disc replacement device. Right after that, the wound is closed. A microscope or surgical magnifier is usually used to help in the complete removal of the disc. Fluoroscopy (intraoperative radiology) is used to visualize the proper positioning of the implant.