What are the signs of infection in the spine? 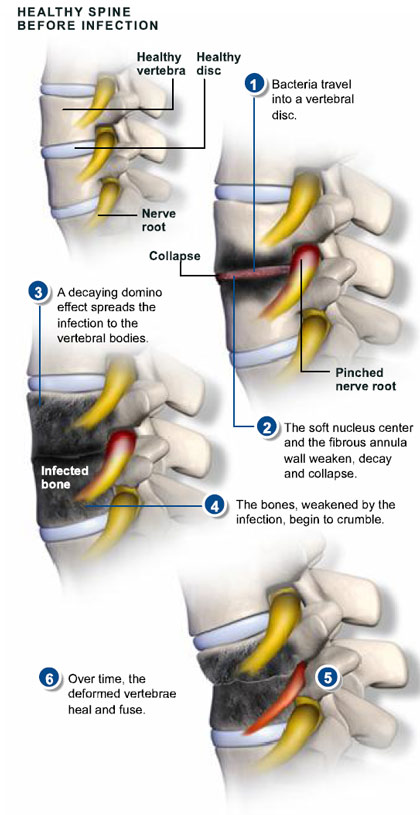 Spinal infections are rare but can occur in your body allows the entry of bacetria through the skin, longs, urine, ears or other entry points.

The clinical presentation is similar in the pyogenic and granulomatous processes, and the patient will present according to the stage of the process, which is basically

1. the presence of pain

4. Progressive deformity of the spinal axis due to kyphosis or kyphoscoliosis,

6. General state of unwellness manifested by anorexia, asthenia (abnormal physical weakness),  weight loss, and fever, which can sometimes be of the low-grade type and predominantly vespertine.

In case of a pyogenic process it has a sharper and more florid presentation.

The penetration of a pathogenic germ occurs in the body through a defect of the protection mechanisms. The survival of germs depends on their ability to achieve successive access to the lymphatic and subepithelial tissues. When the bacteria circulate, although they are not associated with clinical manifestations, a bacteremia occurs, and if a favorable response of the reticuloendothelial system arises on the part of the host, the control of the germs will occur.

If the infection spreads, septicemia may arise. This assumes that germs and their toxins are in the bloodstream. Toxemia represents rather the state of the circulation of toxins than of germs through the bloodstream.

Many spinal infections occur as a result of seeding hematogenous bacteria from distant sites.

Currently there is a wide variety of organisms involved in spinal infection. Staphylococcus aureus is the most frequent cause of pyogenic osteomyelitis of the spine, and Staphylococcus epidermidis is also a frequent cause of infection. Among the gram-negative enteropathogens we have Escherichia coli, Proteus mirabilis, Enterococcus and others that are frequent in patients immunocompromised or postoperative. Pseudomonas aeruginosa is common in intravenous drug users.

Brucellosis is caused by a capnophilic coccobacillus, common in those that live with animals or those that process milk or meat, with frequent lumbar affection that resembles degenerative processes.

Fungal infections of the spine include Aspergillus, blastomycosis, coccidioidomycosis, and cryptococcosis.